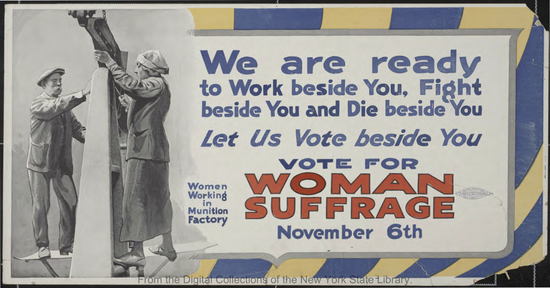 On November 6, 1917, women won the right to vote in New York State. This occurred nearly seventy years after women organized to demand their right to vote at the first women’s rights convention in Seneca Falls, N.Y. in 1848.

In the long fight for suffrage, women in New York had many motivations and tactics they used to achieve their goal. They were inspired by rights held by women in native communities, who enjoyed more economic freedom and political sway in their communities.

Women organized into conventions, parades, and marches.  The women’s movement united with abolitionists and male allies, and drew attention to their cause with posters, pamphlets, buttons, signs, postcards, and songs. Many women throughout New York State sought their rights in a wide variety of ways, privately and publicly--by attempting to vote, engaging in tax protest, and by staging myriad protests over the decades. There were many obstacles women faced in their struggle for the vote.